The Realm of the Fae

Cheevos found in H > Dungeons > Rift > The Realm of the Fae 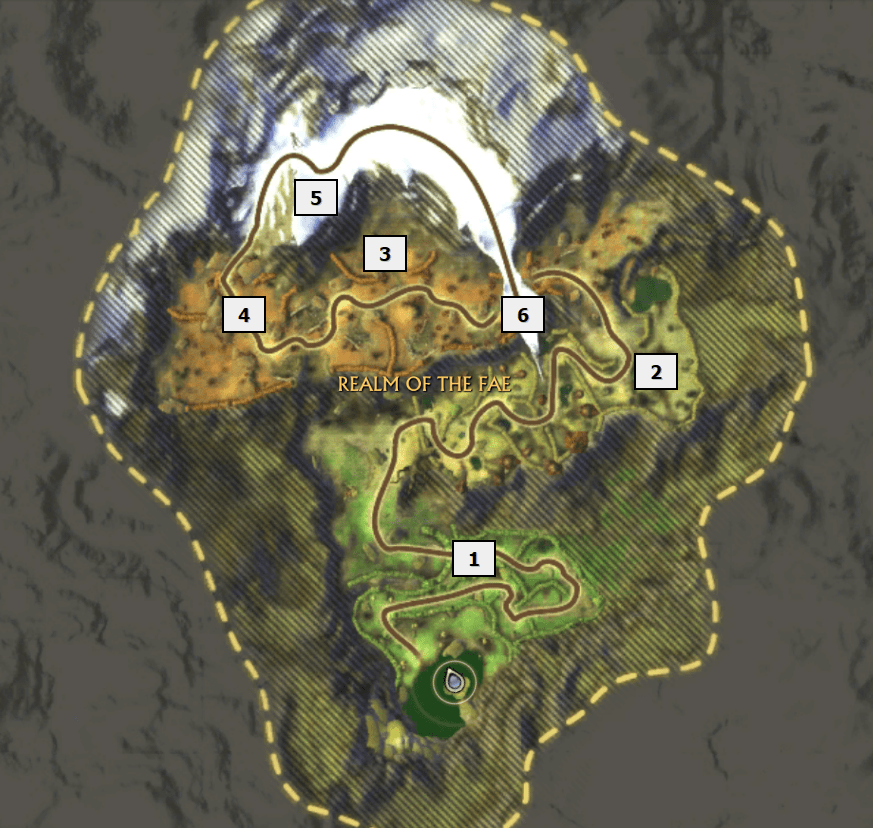 Solo at 70?: Yes easily
All cheevos while solo?: Yes

A level 70 player can easily one shot everything in this dungeon.
This guide is mainly designed to show you how to get the cheevos and do the quests.
If the content becomes ‘relevant’ again then I will expand the boss guides as needed and add more detail.

Low level groups will want to kill the 2 adds before killing the main boss.

After both of the guardians are dead, defeating Maelow is straight forward. He will stun the tank with Wild Kick, and occasionally cast Cottontail on a random player, transmogrifying that player into a bunny. If this is cast on the healer it should be cleansed if possible.

Stay out of the bad! (Luggodhan’s Slime)
Cleanse the dot (Corrosive Ichor)

Nectar Seekers will come out of the two Nectar Hordes to attack you, this can quickly overwhelm a low level group. Stack everything on top of one of the hordes and use AoE/splash damage till the Horde is destroyed, then swap to the other Horde if you need to.

Battlemaster Atrophinius will cast knockback a lot so be sure to tank him with your back against something solid!

The two adds will buff and heal the boss and each other (badly), low level groups may need to kill them.

Shoot to kill!
Stay out of the bad.

This fight has 4 phases, each Phase has a boss enter from a portal, each of the bosses has different abilities. The Avatar of Autumn, The Avatar of Summer, The Avatar of Spring and then Fae Lord Twyl is the final boss to arrive. Each mini-boss must be killed before the next one is spawned.

Simply kill everything and stay out of the bad.

These quests are available in Normal mode Realm of the Fae and are for Guardian Characters only.
To be able to see/pick up the quests, the instance needs to be a ‘Guardian Version’ this means that the group leader or the first player to enter needs to be a Guardian.

QUEST: The Realm of the Fae
PICK UP: The quest is picked up from Tam Daggerborne in The Lodge of the Planes in Sanctum (Pub in the East) /setwaypoint 7608 3107
TO COMPLETE: Talk with Shyla Starhearth in Sanctum

Go to Shyla Starhearth in Sanctum of the Vigil in Sanctum (Ground floor near the throne) /setwaypoint 7515 3052
Talk with her
Your quest objective will now change to ‘Enter the Fae Rift Well’
Go to the Dungeon entrance and enter! (being ported in by group finder/another player works too)
Nuna Hawking will be near the entrance /setwaypoint 1215 1062 hand in the quest

QUEST: The Crown of Twyl
PICK UP: The quest is picked up from Shyla Starhearth in Sanctum of the Vigil in Sanctum (Ground floor near the throne) /setwaypoint 7515 3052
TO COMPLETE: Burn the Crown of Seasons in the Brazier of Winter’s End

Realm of the Fae is a 5 man Dungeon, you can try to get a group together at low level, or wait till you are higher level and solo it. 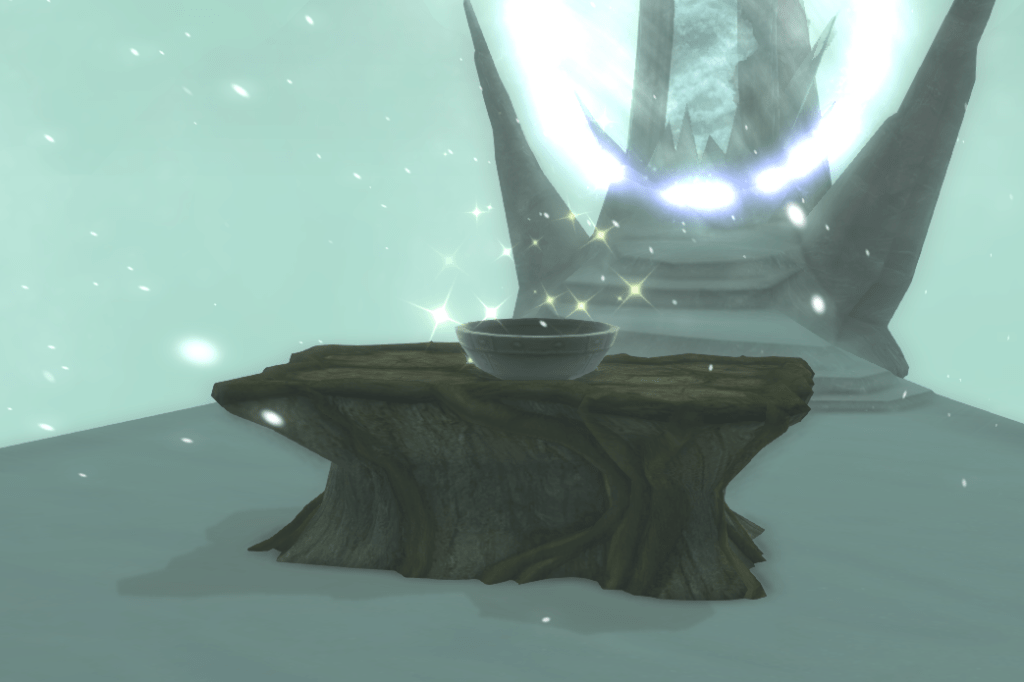 When you kill Fae Lord Twyl, loot the crown from his body, be sure to do this quickly or he will despawn and you will have to run the whole dungeon again, like I did.

Right click the Brazier to burn the crown, unfortunately Prince Hylas will come along and steal the crown.. which really highlights the poor planning of putting the Brazier right next to a portal.

Return to Shyla Starhearth in Sanctum of the Vigil in Sanctum /setwaypoint 7515 3052 and hand in the quest.

QUEST: The Land of Seasons (Normal mode Realm of the Fae)
PICK UP: The quest is picked up from Nuna Hawking in Realm of the Fae Dungeon at /setwaypoint 1215 1062
TO COMPLETE: Bless the Shrines listed 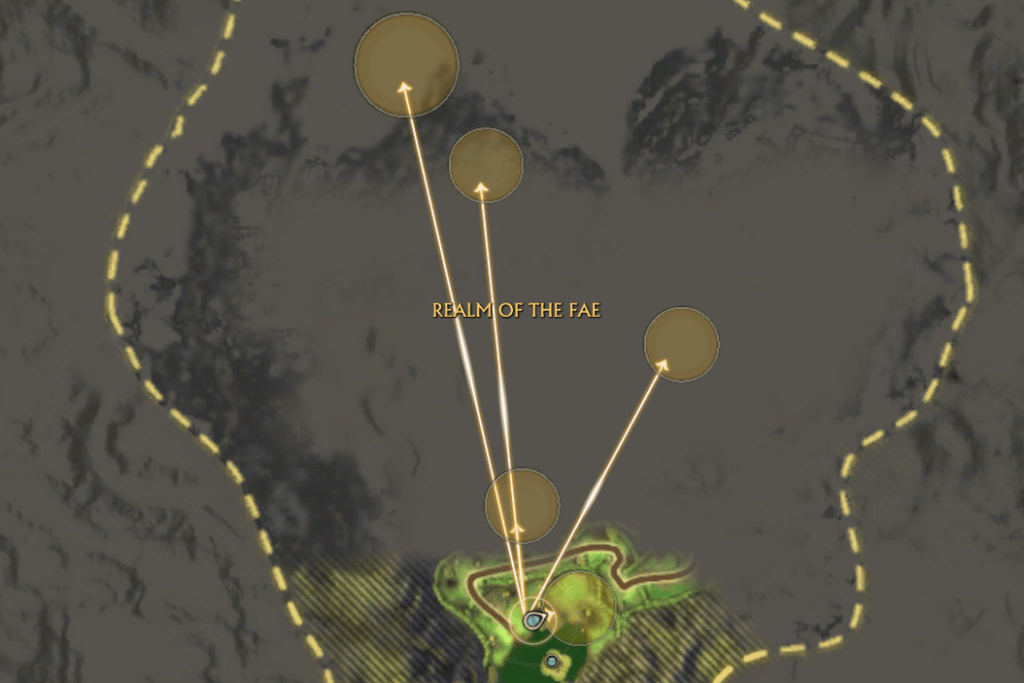 The Locations of each shrine are marked on your map.
Go to each location and click the shrine that you find there.

When you are finished, return to Shyla Starhearth in Sanctum of the Vigil in Sanctum /setwaypoint 7515 3052 and hand in the quest.

Conqueror: Realm of the Fae

Achiever: Realm of the Fae

Complete all the cheevos in Realm of the Fae

Rapid Assault: Realm of the Fae

Expert: Realm of the Fae

Realm of the Fae

Defeat the 4 bosses listed, on normal or expert mode

Kill lifeward Brae and Lifeward Celoah within 10 seconds of each other.
Low level groups will want to get the two adds down to around 5 % health and then carefully kill them both at the same time.

Move out of the slime quickly and cleanse the debuff off the players.

Kill the boss without destroying either of the Nectar Hordes.

Kill Battlemaster Atrophinius without killing the two adds.
Low level groups may need to 2 tank this, keeping the adds out of line of sight of the boss so they don’t heal him.

Bring the Heat to the Chill

Simply kill the boss quickly, before 10 Vortexes are summoned!

Keep the boss up on the slope while you kill him.
Low level groups will need the tank to carefully drag him around the edge so the group doesnt end up in AoE.

HIgh levels can simply DPS and kill before the Tempest touches you.

Low level groups may want to use the ‘stack on the rock’ technique, by getting up on the rock at /setwaypoint 1268 800