What is a battle pass?

Wiki says.. A battle pass is a type of video game monetization that provides additional content for a game usually through a tiered system, rewarding the player with in-game items by playing the game and completing specific challenges. 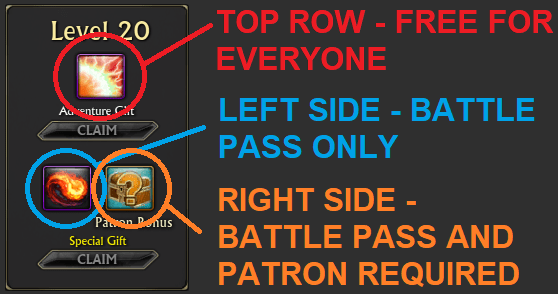 Free Rewards – Top Row – These rewards are available for everyone. (Yes even the free to players!)

Battle Pass Bought – Left Side – These rewards are only available to players who have bought the battle pass.

How much will it cost?

You can participate without spending any money at all, however you will only get the first tier of rewards. Buying the Battle Pass will give you the first and second tier of rewards, the second tier is where you will find all the fluff costume and the mount. Patrons that have bought the battle pass will get a few extra rewards, but more importantly, will get 2 extra dailies per day! (The extra dailies are available for all patrons, even if you haven’t bought the pass)

If you manage to get all the way to level 30 then the price of the Battle Pass is very clearly a good deal! You will get a mount, dimension items, costumes, unique cosmetics, Credits and a large selection of other premium items. Even just a singular mount alone would normally cost more than the entire Battle Pass.. but of course, with the Battle Pass system, you will have to work for that mount!

You can buy the Battle Pass at ANY POINT during the season.. so if you want to you can play the game for a while, try some of the dailies/weeklies and figure out if you feel you can get to a high enough level for the rewards you want.
If you buy the Battle Pass mid-season you will be able to claim the rewards from the levels you have already completed, so you wont miss out on any of the rewards.

You can see the battle pass 3 announcement post here.

BPXP is shared across all your characters on the same region, so you can use different alts to complete all the dailies/weeklies. Be careful which character you claim your rewards on, some of them are bind on pick up, though most are now bound to account.

Playing on Both Regions (NA/EU)

Buying the Battle Pass will activate your extra rewards on both regions (you only need to buy it once), however you will need to earn the XP separately on each region to work your way up and claim all the rewards (BPXP is not shared cross region).
Credits and Loyalty rewards can only be claimed once per account, it will credit on the first region you claim it on, when you reach the same level on the other region you will be able to hit the claim button but wont get the credits/loyalty.

Each quest has a shuffle button, this allows you to swap out a quest for another RANDOM quest.
You can shuffle a single daily each day and a single weekly each week for free. You can pay credits to be able to shuffle more times.

You can Key Bind the Battle Pass menu to open it quickly in game.
There is no default key binding.
You will find Battle Pass in the Key Bindings menu at the end of the list of UI Toggles.

The Battle Pass symbol will appear on your alert tray when you have new quests or when you complete a quest. You can click this to open up the UI too. 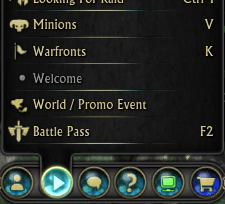 You can also find Battle Pass in the main Activities menu.

Use the Tabs at the bottom to switch between Activities and Rewards.
On the Activities Tab you can see your Daily and Weekly quests. When you finish a quest you claim the BPXP from this list.
On the Rewards Tab you can see all the different rewards and claim the ones you have earned so far.
You can also buy or gift the Battle Pass straight from this window. 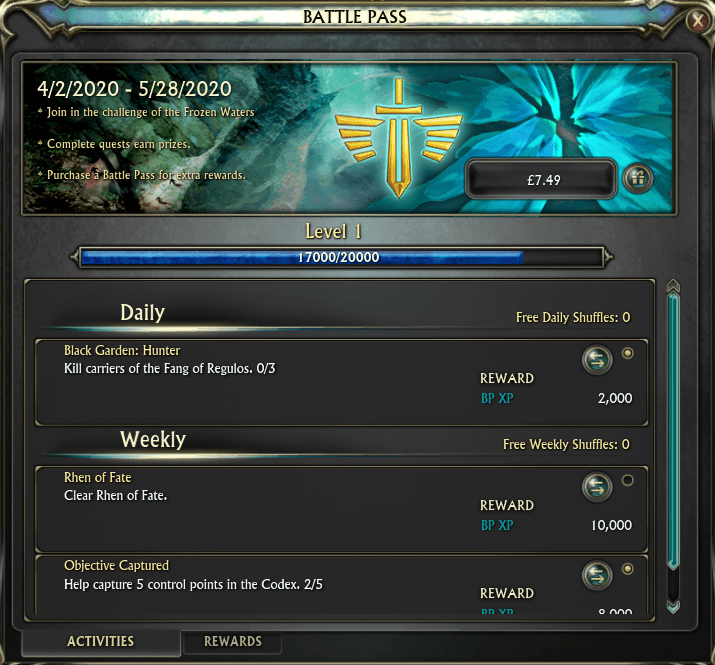 Concentrated Expertise is an item which grants 10,000 Battle Pass Experience.
It was given out with a compensation pack during the Battle Pass Season 1.

Season One - Flames of Corruption