What is a Stronghold

Strongholds are a more difficult version of a planar foothold. They are also a lot like rifts, with waves of invading creatures to destroy and then a boss at the end. There are strongholds for every plane (fire, earth, life, etc).
When they were first released as level 60 end content they were meant to be completed as a group, usually 20 people. A level 70 player can now easily solo them. Destroying strongholds is much much easier with a ranged spec! (at least 35 meters range is ideal).

Strongholds are found only in the Dendrome, the last zone released with the Storm Legion expansion. (June 2013)

When you open up the map in the Dendrome you will be able to see the strongholds that are up..

They have the same symbol as a foothold but with a few extra spikes!
When you mouseover the stronghold on the map you will be able to see which level it is.
There are generally 2 level 62 strongholds and 4 level 60 strongholds on each shard 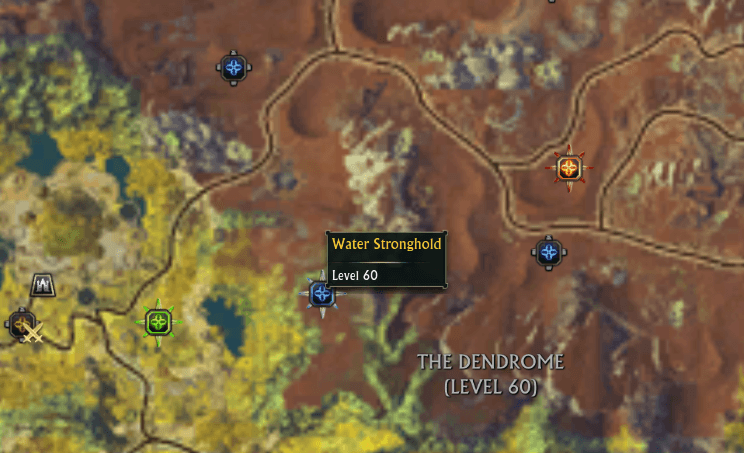 When you first approach a level 60 stronghold it will be surrounded by a variety of planar mobs. You will be able to use your flare to activate the stronghold straight away and then kill all the mobs while the empyreal assault mech is on his way.
There will be a fallen empyreal scout near the stronghold which you can use as a vendor to buy more flares. 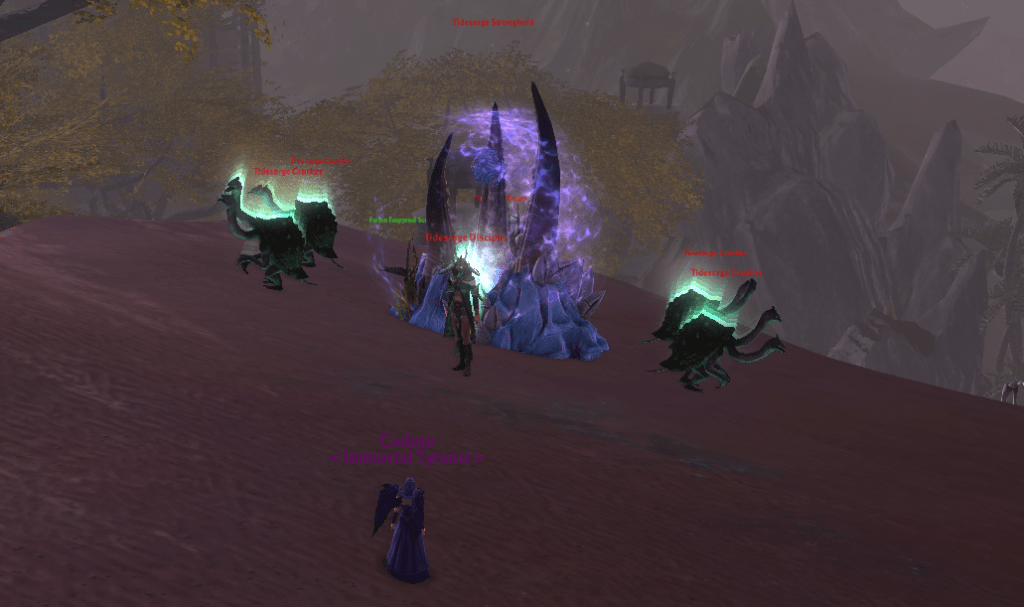 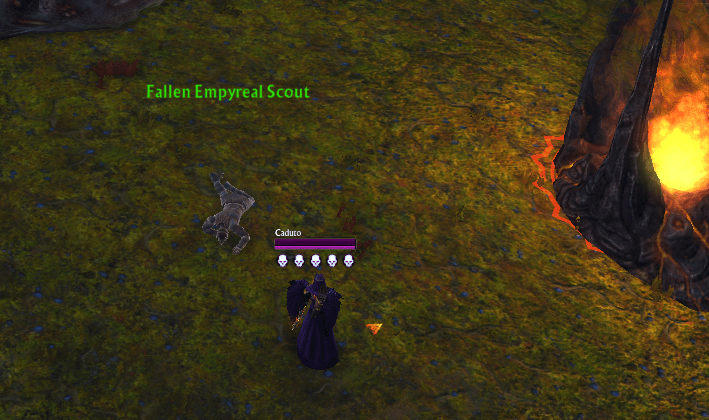 When you first approach a level 62 stronghold there will be 3 footholds around it. You will need to destroy these 3 footholds and the 3 defence orbs above them before you can then use your flare to activate the stronghold.
When you destroy the footholds a leap pad will appear in their place and you will be able to use it to jump up to kill the orbs and to reach the higher mobs in later stages of the stronghold.
Next to the leap pad is an empyreal scout, you can buy more flares from him. 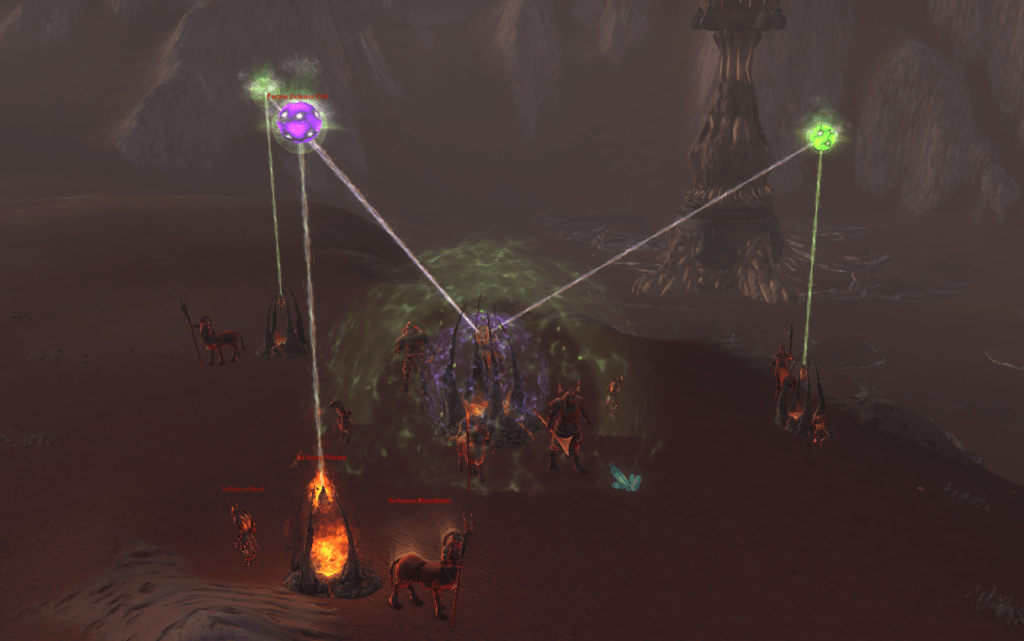 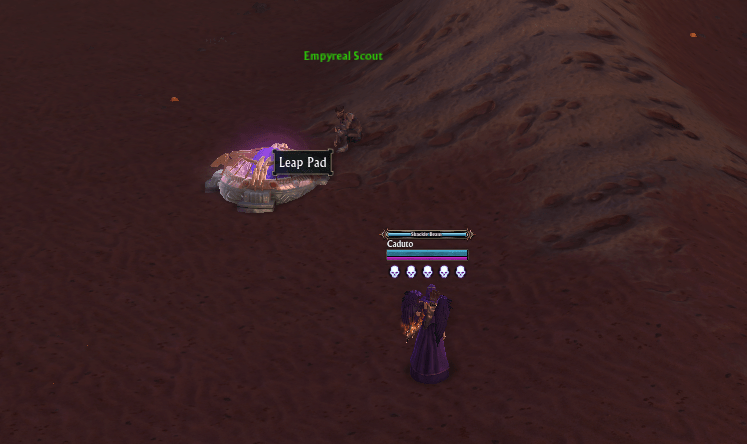 Buying and Using a Flare to Activate a Stronghold

Aa flare is needed to activate a stronghold.
Flares can be bought from the scouts at the strongholds. You can also buy them in the rift store in the main page of the rifts section.

Flares cost 9000 Planarite and 750 Void Stones.
If you have patron and a few other perks (orange tier treasure map etc) then you will just about break even and earn around 9k Planarite from each stronghold. If you are earning less than 9k per stronghold then you will need to top up your Planarite supplies with an NMR rift.
You can make a macro that makes using the flares much easier

Tho be aware that if you use this macro when two strongholds are close together then it may target the wrong one.. In this case just find the flare in your bags and right click it to use it manually.

When you use the flare it will summon a mech who will destroy the shield on the stronghold.. 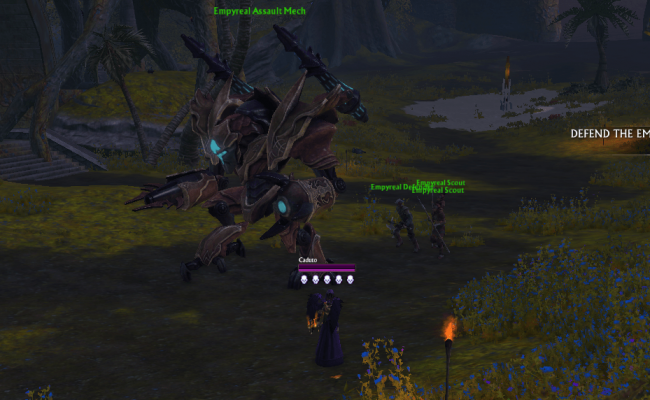 The mech may get caught up trying to kill other mobs on the map while on his way to the stronghold, so keep an eye on him and kill anything he encounters. The mech can be upgraded using nexus infusion but there shouldn’t be any need to do this.

The mech will use his special abilities to destroy the shield on the stronghold..

Then you will need to DPS the stronghold down until it is destroyed.

The anchor needs to stay alive for the duration of the stronghold event, if it dies then the stronghold fails.
The anchor is the ONLY thing you should upgrade!
There are loads of other orbs and platforms and cannons and other things that can be upgraded/built.. but if you do that then the stronghold will become more and more difficult and time consuming.
The anchor also acts as a leap pad, you can use it to jump up to the first level to kill the mobs up there.

QUEST: ANOMALOUS BASTIONS – counts towards the dendrome quests cheevo ‘ HAI AND LOW’
PICK UP: by looting mobs from around a stronghold
TO COMPLETE: the first time you kill a strongholds mobs you will loot a quest item

Right clicking the quest will open up the stronghold quest chain, the first quest is anomalous bastions.

Go to Solstice Tower in the Dendrome /setwaypoint 3085 5570 to hand in the quest and pick up the next one. 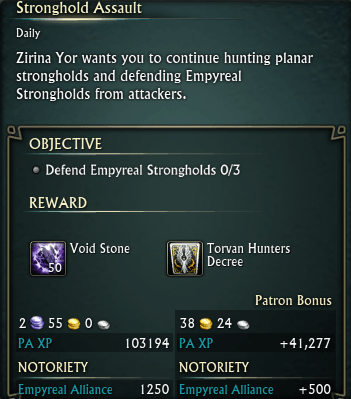 The rewards include notoriety for Torvan Hunters and the Empyreal Alliance.

Very easy to do as a level 70 player!

complete 500 strongholds… this will take a while!

use your flare to activate a stronghold 100 times.

The final stage of each stronghold is a boss, each of these bosses has its own cheevo worth 5 or 10 points each.
When you have managed to kill all the level 60 or 62 bosses you will pop the meta cheevo for 60 or 62.
To help you figure out how to get the bosses you are still missing i have created a list of each boss explaining which plane to kill for a chance for that boss.
For example: if you are missing the cheevo to defeat ‘OPULON’ you would want to keep killing level 60 death strongholds until he pops.. If you miss IKARAS then you would kill level 62 fire strongholds. 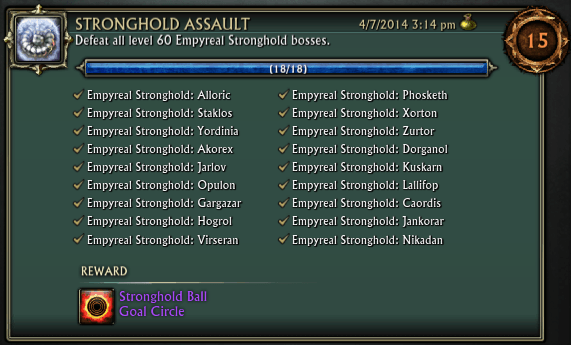 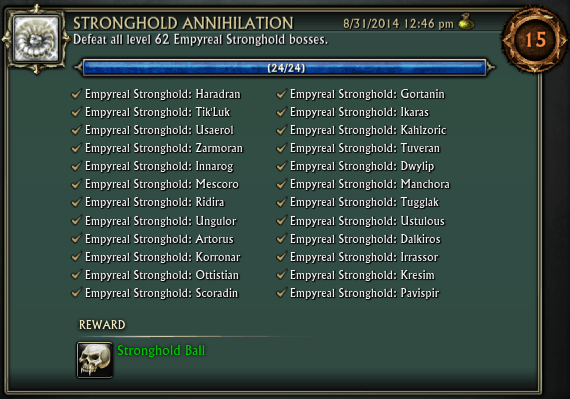