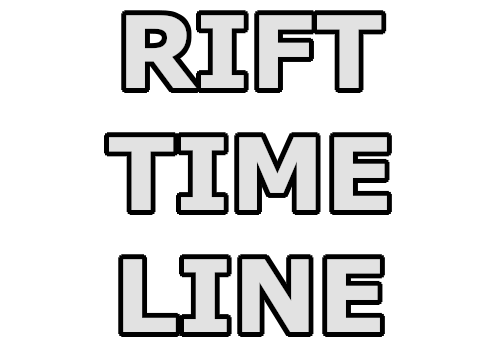 This timeline was first created on 2nd April 2022. The plan is to keep it updated as things progress (or not) with Rift.
If you know of any historical Rift events that should be added to this timeline, let me know!

State of the Game - Common Questions

How busy is it?

— EU & NA – You will find levelling zones to be quite empty, but main cities have players in them.

Can I find groups?

— NA & EU – There are PUG groups forming in chat during peak times for both Raids and Dungeons (Level 70). To find groups of players levelling join Instant Adventures! Open World questing is pretty much always solo play. At end game, there are often DRR/Crift groups each evening, as well as players calling out VP events and Xarth Mires.

Are there active guilds?

— NA & EU – There are a few large guilds with one or more regular raid groups as well as groups for open world content such as raid rifts. There are scatterings of smaller guilds that may band together for group content or that purely PUG for group content.

— There has been no content for a long long time. Recently there have been stirrings of new content, it seems a new ‘team’ of devs is testing the waters by starting with a few simple quests. Hopefully this is a sign that Gamigo is now showing an interest in adding more content to the game, however, any content that is added ‘soon’ is likely to be very small and not the huge raids and expansions that players are hoping for.

—  Every dungeon, raid, puzzle, open world zone, artifact collection etc is still there and is still in a very playable state. Some limited time mounts, pets, minion cards and wardrobe are currently unavailable.. there are still PLENTY of these items available to collect that will keep you busy for a long time!

What about the old Raids and Dungeons?

— All the old Raids and Dungeons are still accessible, the only Raid that was ever ‘removed’ is the original HK, this was turned into a level 65 version HK which is still playable. Groups (for high level chars) often form in chat to run old Raids or Dungeons as players attempt cheevos or just want the wardrobe unlocks from them. A lot of the low level Raids/Dungeons can be soloed once you reach high level.

How is the levelling experience?

— Levelling in open world is pretty much going to be solo play all the way to 70. However you can join instant adventures to group up with other players and battle as a team. You can also try your luck in the level chats and try to piece together a dungeon group, this can be successful, especially during peak times. Asking questions in chat is usually met with helpful people who will try to help you out.

How is Shard Stability?

What about purchasing and support?

— Buying items directly from the rift store works fine, and you buy packs from the glyph website too. Some players experience issues with using steam wallet.
— The Rift Store is extremely outdated, there are a bunch of items on there (especially gear) that just shouldn’t be there anymore. So be careful not to waste your money! Ask in the chats for players opinions about what is worth it to buy, you may also find the Cadrift purchasing page helpful.
— Support Tickets are being answered, but sometimes players are left waiting for an answer for weeks. If you have an issue that you think may require support to fix, write the ticket asap! While you wait, have a look at the Cadrift tech help page, maybe something there will help.
— Forums – The official Rift Forums are currently down, they have been down since the first week of February 2022. We know they went down for ‘security reasons’, meaning the old forums were simply not safe to use anymore. Players had been complaining about this for a long time! We now have community forums over at the Ghar Station.

With the Forums down, you can find the old Rift Patch notes on the wayback machine..

Note: The dates are MM/DD/YY